I was blissfully ignorant when going into our first pregnancy. I remember being worried about things like gaining weight, giving up wine, finding babysitters and the fact that we’d have to move out of our small 1-bedroom condo that we’d bought just months prior – worries that in hindsight seem so insignificant.

1 in 4 pregnancies end in loss (miscarriage, termination for medical reasons, stillbirth). That’s 1 in 4 pregnancies, not 1 in 4 women. Since many women are pregnant more than once in their lifetime, that makes the odds go up even more.

While it’s an unfortunately a large club, pregnancy loss is a club that no one wants to be part of, but once you are you are SO thankful for the community. There’s a huge sense of shame, guilt and loneliness on top of the grief and sadness for loss parents, and knowing that you’re not alone and that it’s not your fault is so important. For me, the only thing worse than talking about it is NOT talking about it and trying to pretend it didn’t happen. Sure, some people say things that aren’t helpful and it doesn’t make for the most comfortable conversations, I realize that before this I would not have known what to say and I’m still not sure I say the right things, but I do know that the silence is the worst. This is why I’m sharing our story, in memory of her.

We had an early ultrasound after our first prenatal visit for dating purposes and discovered I was 9 weeks pregnant and everything looked perfect. We heard and saw the heartbeat, saw the baby moving around like a little jumping bean. We didn’t do any major announcement, but did start telling some close friends and family at this point, we could hardly contain our excitement!

Our next appointment was our 12 week NT scan the day after Thanksgiving, appropriately called Black Friday. They had us do a routine meeting with a Genetic Counselor before the appointment who explained our options for genetic testing and risk factors and discussed our family histories. I remember just wanting to rush through the meeting, we were young(ish) and healthy and so excited to get out of there and into the ultrasound to see the baby again, little did I know how much time we’d end up spending in that counselor’s office…

Needless to say, this ultrasound did not go as smoothly as the last. The good news was the baby had grown, the heartbeat looked good and the nuchal fold was well within normal range and the baby was still moving around (even waving hello). 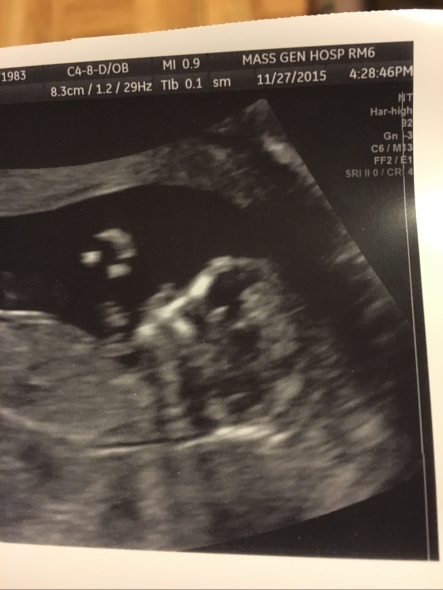 The not-so-great news was that the nasal bone was absent – something that they look for as a marker for a chromosomal abnormality. They had me do some blood work and scheduled us for another ultrasound the following week to have another look.

One week later (about 13 weeks pregnant) we went back in and they were still not able to find the nasal bone. We also got bad results from my blood work; I didn’t understand all the numbers, but basically everything that should have been high was low and vice versa. We were offered some options for further testing at that point and we opted for a CVS test. This is similar to an amniocentesis, but they are able to do it earlier in the pregnancy (in my case, at 14 weeks). I understand testing at all is very personal. Some people forgo any testing, but for us, we wanted as much information as quickly as possible.

The CVS test provides quick results for common chromosomal abnormalities like: Trisomy 13, Trisomy 18, Trisomy 21 (Down Syndrome). It also can tell you the sex since it tests for the X/Y chromosomes. I got a call from the Genetic Counselor just a few days after – The test came back negative for any common chromosomal abnormalities and the baby was a girl. This was happy but confusing news, because something was still wrong and now no one had any idea what it was. The next few weeks were a blur. There was talk of constant monitoring, growth issues (IUGR), issues for my health, more testing, all of a sudden all of the ignorant bliss was gone.

And then she was gone.

I had a D&E procedure when I was 16 weeks pregnant. We opted for more testing after, because we still needed and wanted answers and found out our baby had Trisomy 16, potentially confined to the placenta, which would explain why things were going fine until around 12 weeks when the placenta normally takes over. We left the hospital that day with nothing but a tiny footprint, and broken hearts.

Pregnancy and parenting after loss is a whole different blog post that maybe I’ll write about some day. While I hate the saying that “everything happens for a reason” (very high on the list of unhelpful things to say to grieving parents) I do try to focus on some of the good things that came out of this last 3 years: Our beautiful rainbow baby, some serendipitous friendships and so much love. In this moving post blogger Jenny Albers writes “What matters is that there was already a baby who was loved immensely. And love cannot be measured in weeks” and that love certainly cannot be forgotten. Loved and remembered today, and always.